Here is a quick update on some of the great performances so far this week!

This weekend will see a huge amount of action with many Eagles athletes playing 2 games. We will update tomorrow morning where you can follow the action.

The Matadors had a tough battle against San Diego State yesterday. Down 15 the team put in a huge effort bringing the score back but eventually went down 55-58. Tessa put in a huge performance scoring 17 points, grabbing 10 rebounds while also dishing out 2 assists.

Texas Wesleyan managed to hold on against Wiley College winning a close battle 78-77. Sam had another good performance finishing with 10 points and 4 rebounds in 18 minutes.

Eckerd College took on the University of Tampa today in a real defensive battle of a game. Unfortunately, Eckerd ended up going down in a close one 44-48. Zoe had a great game leading Eckerd in both points and rebounds. Zoe finished with 11 points and 7 rebounds in 27 minutes.

After a tough first up loss Pepperdine bounced back with a big 107-82 win against Cal Lutheran. Harrison had 6 points, 3 rebounds to go with an assist and a steal in the win.

The Huskies had a good hit out against Eastern Washington winning 79-69 making it 2 wins from 2 games to start the season. Sam had 2 points and 5 rebounds. The team now focus on the 2k Classic in New York starting tomorrow.

One of the team’s game’s will be on ESPN in New Zealand Saturday (We will send out times once they are confirmed after Friday’s games). 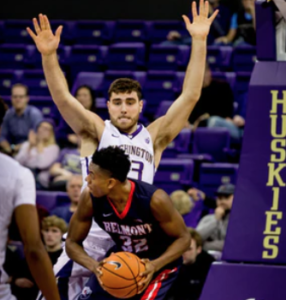 Whitworth were in control all game against La Verne University. Whitworth eventually finished up winning 95-73. Sam played 25 minutes in the win scoring 4 points while filling the stat sheet adding 5 rebounds, 3 assists and 3 steals.

Southeast Community College had another win moving to 2-3 on the season winning 88-71. Shou added 4 points and 6 rebounds.

Upcoming over the next week we have some articles to look out for with an interview with Sam Smith who is currently studying and playing at Texas Wesleyan University and also a look into basketball program at Middleton Grange High School who have produced several college basketball players.

As well as this we will have plenty for updates on where to follow the Eagles athlete’s and some recaps.