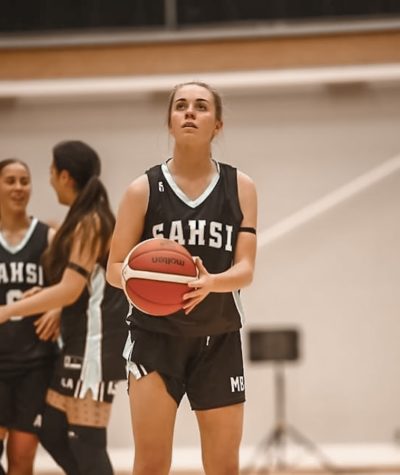 Makenzee is a dynamic point guard with elite speed. Her strength is being able to make the best read once beating the first line of defence. She is the leading scorer in her high school team and has the ability to score at the rim and at the three point line. Makenzee is a relentless defender who sets the tone defensively for her team.

Makenzee is the daughter of Basketball New Zealand CEO and Former Tall Black Dillon Boucher. Dillon was a part of the 2002 Tall Black team which finished 4th at the FIBA World Championships in Indianapolis.

Makenzee has had great success in her career with various basketball achievements as well as captaining the below teams:

My name is Makenzee Boucher and I am an elite young prospect coming out of NZ. I have international speed & talent as a playmaking guard. I have been the standout guard for the Westlake Girls High School team and I graduate in December 2021 (’22 recruiting class). The Westlake Girls coach is a part of the New Zealand Junior National coaching staff – Bronwen Davidson.

I have been a member of both the U15 & U17 top teams for my province – Harbour, as well as captain in my last year of U17. I now play for the Harbour Cyclones who are in the D-league (League below the NBL Womens League – Top League in New Zealand), I too captain this team and we placed 2nd in the national competition. I have been in my High School’s top team since I started at the school (5 years) and am now in my last year and have been named captain. Unfortunately, the past 2 years in New Zealand has had difficulty with COVID forcing tournaments and games to be cancelled. Despite not being able to play the final, my Westlake team finished first in Auckland by default as we were top of the table. I am consistently one of, if not the top scorer in my team and I also lead the team in assists and steals. This year despite COVID I was able to attend the Steven Adams High School Invitational camp. This camp was made for the top 20 boys and top 20 girls high school players in the nation. I was lucky enough to be selected both this year and last year also. At the end of the camp, there is a showcase game and the athletes are split evenly to compete, I was named captain of my team.

With my speed, I am able to create room for myself to have uncontested drives, shots or passes. I am confident in my passing ability and won’t hesitate to push the ball. To compliment my full-court vision I have a high basketball IQ and tend to see opportunities and passing options that others may not. I am able to release passes accurately and efficiently. I pride myself on my full-court defence as well as on the perimeter, because of my speed I am able to stay in front and cut people off when they least expect it. I trust my speed enough to close the distance between me and my player leaving them with less room to make plays. As well as this I am a team player and a natural-born leader. I am a tough competitor and you can have trust that I will dive on any loose ball and put my body on the line. I am a strong believer in bringing 100% energy on and off the court and this is what makes me the player and leader I am.

I have known Kenzee for 5 years. I first coached Kenzee as a Junior in our Open team and later in the Premier Basketball team over the last 5 years at Westlake Girls High School. Our team has 3 core values that we refer to constantly each season: respect, excellence and discipline. As a senior Kenzee espouses each of these qualities at training and in our games.

Kenzee shows respect in the way she communicates with her teammates and the staff. She is courteous and mindful of others. Kenzee has taken on a leadership role in our team, she is in tune with the team dynamics and is able to voice her opinion with confidence and diplomacy. Kenzee displays excellence in her approach to training. She always aims to train and play to the best of her ability. Kenzee sets high standards for herself. At training, Kenzee will call the team to account if they are not pushing themselves to our normal level. Kenzee shows discipline in her physical and mental preparation for basketball. Kenzee has been focussed on basketball
this year and as a result has been outstanding for our team.

As a starter, Kenzee is a top scorer and led the team in steals and assists this season. As a leader and a senior, Kenzee has developed a high IQ for the game. She has tactical awareness and is able to adjust our strategies to different players and games.

Defensively, Kenzee is a key player for us. She brings intensity and hustle to our defensive system. Kenzee is able to stay in stance and maintain close proximity to her opposing player. She is able to cause turnovers with her sustained pressure. Kenzee has pace and quick reflexes as seen by the number of steals on her season statistics. Kenzee has very good peripheral vision and off the ball Kenzee often takes advantage by converting steals into uncontested layups.

Kenzee is our main ball carrier and has many skills as a guard. She averaged double figures for scoring in each game. As one of our fastest players, Kenzee’s sense of timing has paid dividends in running lanes well ahead of her defensive player. Kenzee has a variety of ways to score inside as well as having a perimeter game. Kenzee is a team player and led our team in assists. Kenzee’s skills as a passer is one of our offensive assets. She understands space and time when delivering passes that places her teammates in an advantageous position to score.

It has been my pleasure getting to know Kenzee and coaching her during her time at Westlake. I wish Kenzee every success for her future endeavours.

Makenzee instinctively understands space and I believe it is the key to her game. On offence she see gaps, open players and chances others don’t which creates scoring and breaks down oppositions. Over the time I have watched her play she has also grown into a consistent 3 point shooter. On defence she brings steals and builds pressure. Combined with her speed and agility she usually my first choice to apply pressure on the ball or spearhead a press. Makenzee has a high IQ and understands concepts quickly. She is a good teammate and is encouraging of those around her. Makenzee is a fierce competitor, determined and rugged, she never quits. I have observed her overcome adversity with courage and hard work and I can’t speak highly enough of her character. Makenzee is a leader and would be valuable asset on any team.

Makenzee is a talented athlete, who has a high work rate, she is very committed an  extremely coachable young woman.  Makenzee has a high basketball IQ with excellent court vision giving her the ability to find open players, her quickness allows her to beat her man off the dribble and get to the basket. Makenzee is a physical and aggressive defender who will often step up when marking the best offensive players in the opposing team, she a leader on and off the court, which makes her stand out amongst the rest.

Makenzee is one of the easiest players to coach. She has a very high basketball IQ and great defensive instincts. She is quick of the mark, and due to her athleticism and high level of other sports, her first step and footwork separates her from other guards.

She is always willing to give her all on every possession. Makenzee is the ultimate teammate too by keeping the team enthusiasm high, on-court communication, and leadership skills.

Makenzee has a lot of potential to learn and grow her game against more experienced veteran players. Despite being small in stature, she doesn’t shy away from contact with bigger and more aggressive players.

Makenzee is one of those players you coach that you don’t have to worry about. She does what you need her to do and what you ask her to do.

Highlights
Makenzee is #6 Red jersey in this full high school game.
Makenzee is #3 Black. Check out Makenzee's Steven Adams Invitational Full game on this link. Skip to 2.11.00 in the livestream https://www.stevenadamscamps.co.nz/livestream/