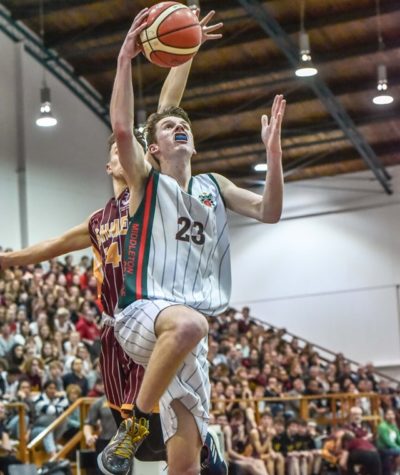 Ben is hard working both on and off the court. He is extremely tough and battles through any situation. He is a positive leader and has shown lots of great leadership qualities.

Ben is a standout forward for the Middleton Grange School team who are one of the best high school teams in New Zealand. Ben is a forward who you can play on the interior and perimeter. He is extremely versatile and has a great motor. He is part of the Mainland Eagles Academy which has produced New Zealand players Sam Timmins (University of Washington, 2017), Angus McWilliam (TCU, 2018), Quinn Clinton (St Mary's, 2018) and Max de Geest (Long Beach, 2019).

Ben is an extremely versatile combo forward who plays hard on both ends. He can score the ball in a range of ways and rebounds well on both ends. He has the ability to attack well from the perimeter and has a range of finishing moves from the perimeter. He also has good touch and a range of moves in the post. He has a great change of speed with solid ball handling skills making him hard to guard. He is extremely good in transition and pushing the pace. He will be even tougher on the attack as he continues to add weight/strength. Good decision maker and passer with good feel for the game. He can defend multiple positions both inside and on the perimeter.

Ben is a very capable and bright student. Ben’s current SAT score is 1060 and his current GPA is 3.6.

Contact us to discuss recruiting opportunities for our prospects.

The Mainland Eagles Academy was established in 2014 by the Canterbury Regional Basketball Foundation (sole beneficiary limited partner of the Canterbury Rams) to support development pathways for elite junior players throughout the South Island to open opportunities for National teams, US College scholarships & career pathways.