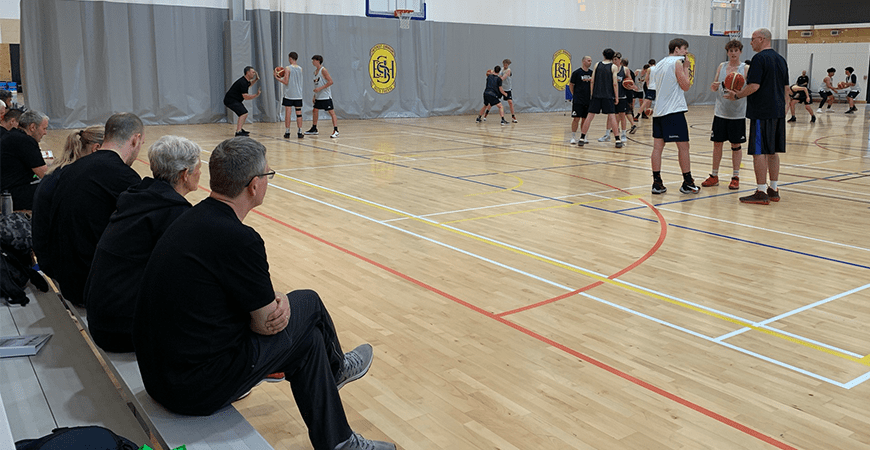 Several of New Zealand’s most promising and accomplished basketball minds gathered in Christchurch a couple weekends ago to offer aspiring coaches an insight into their careers and experiences.

The assembly was the inaugural South Island Coaches Residential Workshop, which in partnership with Basketball New Zealand and the Mainland Eagles Academy (MEA) took place at Shirley Boy’s High School and Cowles Stadium.

Basketball New Zealand Coach Development Director Natu Taufale says being able to see how some of the country’s top coaches operate and the opportunity to pick their brains was invaluable for registrants.

“One of the biggest eye-openers for those who registered for the workshop was seeing how the likes of Mel Downer or Mike Fitchett ran their sessions, interacted with the athletes and assessed themselves afterwards.

“We talked a lot about being vulnerable and having an open mind when having others critique our work, so for the aspiring coaches there to see that even Mick Downer has aspects of coaching he’s working on and then being able to observe how he goes about improving on it was massive.”

The workshop coincided with the MEA Athlete Camp which had 60 athletes and 12 coaches involved. This allowed for those on hand to get on the floor and train some of the top high school athletes from around the South Island. Of all the talented youngsters in attendance, just under half (24) travelled from outside of Christchurch.

The overarching theme of the workshop and camp was “Personal Growth by Collaborative Support” which throughout the camp was embodied in the various sessions for both athletes and the workshop coaches. The focus for those still playing was to educate them around positive habits/routines that would further help their personal development.

“We started off the weekend by illustrating the importance of having a coaching development plan and how to set that up for the months ahead. If there’s one thing we wanted those on hand to go away with it was that you need to map out how you’re going to improve,” added Taufale.

“After we got through that section, we then showed them how the workshop was going to play out and we did that by splitting it into four sections – learning, observing, practice and review – and revolved it around exposing them to the national style of play.

“By having the workshop run alongside the athlete camp, not only were we able to teach them the x’s and o’s, but it also allowed for them to see how the bigwigs do it, get on the court and give it a go themselves, before wrapping it up with self and peer assessment.

Alongside the various high-quality coaches, former professional players such as Phill Jones and Ed Book were there to help mentor the athletes and provide them the chance to hear from some of our most successful basketball players in the country.

Taufale says that he has already cast his eye to 2021 where he plans to have a similar workshop run in the North Island.

“We had a lot of positive feedback from everyone that was involved across the weekend and so for me that means there’s a desire for more initiatives like this to be run throughout the country in the future.

“It’s important to note that everything that happened over the weekend didn’t stop on Sunday, as we’ll be keeping tabs on the registrants over the coming months and helping them work through the development plans.

“I’d like to say a big thank you to the Mainland Eagles Academy, lead coaches and South Island Basketball Associations for the collaborative support in running this workshop.”

BBNZ welcomes any coach looking to take the next step in their coaching journey. For those interested in learning more, head over to www.sporttutor.nz/bbnz. Once registered, login and search Learning/BBNZ catalogue for access to the library of online modules.