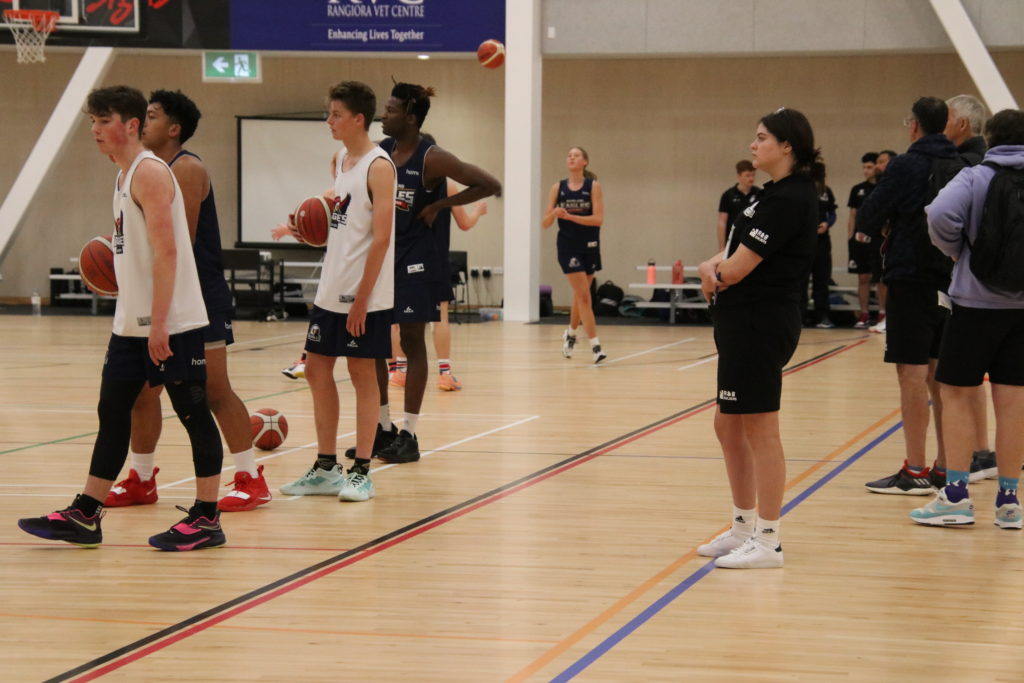 The second annual South Island Residential Coaches Workshop alongside the Mainland Eagles Summer Camp was a major success this December, with record numbers of athletes and coaches in attendance.

“There are many opportunities for coaches to observe, discuss and reflect throughout the camp as well as create new coaching relationships. It is the beauty of running this workshop alongside the athlete camp,” Eagles General Manager Caleb Harrison explained.

“We are proud to partner with Basketball New Zealand on an initiative like this.  The support from Basketball New Zealand from both Brad Edwards & Leonard King has added a lot of value in what we have been able to offer both the athletes & coaches including high performance technology and cutting edge access to best practice coaching.  It is a unique environment for coaches to be able to connect and develop relationships outside of the competitive arena and be able to have the opportunity to have informal off-court coaching discussions with someone like legendary former Tall Black head coach Keith Mair.”

The theme for this years workshop was “Let’s Play – Developing Decision Makers in Game Context.” Workshop Coach Developers Alex Stojkovic, Dave Harrison and Sid Tauamiti were instrumental in facilitating and supporting the workshop coaches throughout the weekend, covering concepts such as Questioning, Relationships and Wellbeing as key topics.  The workshop opened with a formal dinner for the workshop coaches & on-court coaches with guest speaker Pat Barwick, all of the coaches received a coaches pack including whiteboards & bags thanks to the generous support of R&B Builders.

Camp Director and Eagles Top of The South Head Coach Mike Fitchett was leading the athlete side of the camp alongside a group of some of the top coaches in the South Island.

“Mike and his coaching teams planning, format and execution of the on court basketball sessions was outstanding” Caleb Harrison says. “The sessions provided many opportunities for the workshop coaches to oberseve and reflect on in relation to the key themes of the workshop. It made for a positive learning environment when workshop coaches and on court coaches collaborating throughout the reflection process.”

Michael De Bono commented on the workshop saying “Offering quality development experiences to coaches and coach developers is a key initiative for Sport Canterbury. We are delighted to support the Mainland Eagles organisation in the delivery of the Residential Coaches Workshop which provides a unique learning opportunity for community coaches and an opportunity to connect with like minded coaches. We look forward to continue working closely with the Eagles organisation to provide a program which supports the growth and development of community coaches”

An exciting addition to this years camp was the pre-session film analysis and full 40min games played over the Sunday and Monday portion’s of the camp. Camp Director Mike Fitchett commented on this addition to the camp saying “We have the best high school talent from throughout the South Island all at one camp. It was important to get these players competing in actual game environments, especially with the multiple basketball tournament cancellations we’ve had this year. It also tied in well to our overall camp theme and provided the workshop coaches the opportunity to obseve & reflect on game coaching strategies.”

The athletes also had education sessions of their own with Eagles & Tall Ferns Physio Lidia Belles leading a session on recovery and we were fortunate to have newly appointed NBL General Manager Huw Beynon present on media education.

“It was a very successful weekend and I thank everyone who was a part of it. A special thanks to Basketball New Zealand and the South Island Associations for the support & collaboration in making this event happen” Caleb Harrison said. “We can’t wait to see what’s in store for a bigger & better workshop next year.”